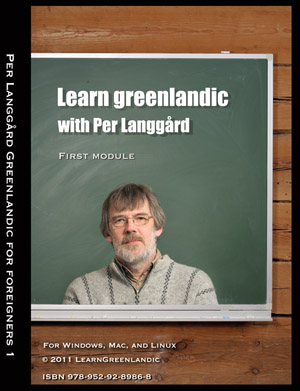 Greenlandic is a polysynthetic language that in no way resembles anything you know in advance, neither in vocabulary nor in grammar. There is no apparent sense in the many lengthy words and strange sounds.

Many people are convinced that Greenlandic quite simply is inaccessible for adult learners without extreme efforts.

We believe that this attitude in itself is a major reason for the fact that almost nobody in reality acquire Greenlandic.

We also believe that this state of affairs is not a law of nature. Greenlandic is a modern, vital language with many speakers, a rich literature, and an impressive suite of dictionaries and grammar books considering that there are less than 60.000 speakers of Greenlandic in the world. Of course Greenlandic can be acquired.

Still, we do not claim it to be an easy task. It is not! It is as a matter of facts rather difficult but as the learner soon realizes difficult for reasons others than one would believe for a first approach to the task of learning Greenlandic. The language itself is highly systematic. Once one grasps the logic in Greenlandic word and sentence formation the gate to normal L2 acquisition of the language is opened. 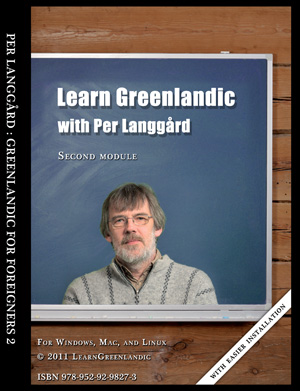 It is this logic Greenlandic for Foreigners will take you into. We know from experience that one cannot acquire Greenlandic via “normal” communication based learning strategies as known from most other L2 class-rooms. There simply is no way around systematic acquisition of a set of basic rules and – for most of us – no way around adjusted attitudes to the learning proces.

Greenlandic for Foreigners will help you to

Without such skills you will never learn the language but we are on the other hand convinced that once you have acquired them Greenlandic will cease being a mystery and simply become a language in the row of other languages you have learned to master.

Or to put our credo a little differently:

The difficulty is not to acquire Greenlandic, but to find the way into acquisition of Greenlandic