Greenlandic for foreigners is an online course material originally developed for self study, but more often used in combination with teaching.

It consists of Module I and Module II, and a forthcoming Module III.

Module I  contains material in the area of 20 – 30 working hours for most beginners for a preliminary review. To really learn the content one must expect to invest about twice the effort to include also the learning contained in the three language technology based learning machines included on the DVD.  The DVD contains:

1 – Video followed by two reception exercises and the lecture as text on paper: The special Greenlandic sounds

2 – Video followed by three reception exercises and the lecture as text on paper: Typical pronunciation mistakes and typical problems for correct reception

3 – Video followed by four writing exercises and reception exercises plus the lecture as text on paper: Tones and melody in Greenlandic

4 – Video followed by four writing exercises and reception exercises plus the lecture as text on paper: Picking up and adding together Greenlandic pronunciation plus ten sentences daily language

5.1 – Video presentation of words, derivational morphemes, and endings in lesson I-5 and the first text taped on video

5.2 – Video taped introduction to Greenlandic’s structure, presentation of four out of eight sound rules, an introduction to the instrumental case, and a manual for word acquisition. The lecture is followed by seven exercises in reception of sound patterns and meaning as well as in word creation. 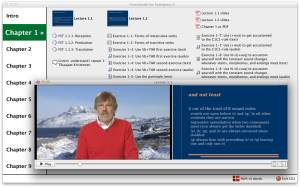 Module II is produced in collaboration with Nuuk TV. It was published early in 2012. It covers study material enough for 50 – 100 work hours for almost all learners even at intermediate to advanced level and furthermore contains in practice endless amounts of exercises suitable even for advanced learners.

The DVD is based on a rather steep progression and will over 8 chapters with each two video lectures and a dozen or so exercises touch upon most of all Greenlandic grammatical items. 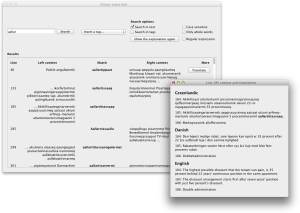 It furthermore introduces existing lexical and language technology based resources available for personal use and for group use. Finally, it contains a corpus with a little over 30.000 running words analyzed in depth morphologically as well as syntactically. Each word is linked to the sentence in the Greenlandic corpus it was taken from and this sentence again linked to its original translation.

A technical comment to DVD2: Module II happened to grow quite a bit bigger than we originally planned it to be. It covers 25 video streams, 16 automata (word generators), a parallel corpus with query tools and about 50 subject specific exercises. We also managed to include a raw translation to English into the Greenlandic-Danish parallel corpus. Technically it meant that the material no longer could be stored in a decent quality in a normal DVD so we decided to produce on a dual-layer disc in order to maintain a picture quality we would not be ashamed of in spite of the extra costs it meant for the production.